Champion House in Southwick have been incredibly supportive of ASNP – collecting and donating £245 to our cause. We invited Danny Cagney from Champion House to come along to one of our February Play Scheme sessions to see our work in action. It was fantastic to have them along to Herons Dale, show them around and introduce them to some of the children who they’ve helped with their donation – they even presented the cheque directly to some of the children which we all loved! 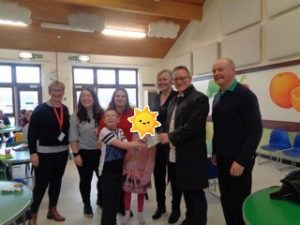